Can a person with no formal power create social change?

Students in Arizona State University's Master of Science in organizational leadership program recently learned that the answer is a resounding “yes."

On Jan. 27, Gary Shepherd shared with students in Elizabeth Castillo's course, OGL 550: Leading Organizational Change, the story of how he created a peer education program while incarcerated in Florence, Arizona.

"His leadership launched a program that became a statewide model for inmates to develop skills, attitudes and behaviors needed for successful release and re-entry into society," said Castillo, assistant professor in the College of Integrative Sciences and Arts' faculty of leadership and integrative studies.

Shepherd began his story by sharing the missteps that led to his life sentence at age 20. In prison, he started looking for answers to what led him down that path.

He told students that he became an avid reader of philosophy, science, psychology and history to find the meaning of life (see his interdisciplinary reading list in the image below). His quest for knowledge and self-awareness led him to evolutionary science. Shepherd said he was awestruck by the recurring pattern of increasing complexity and higher levels of order that cooperation and prosocial behavior made possible. He was also impressed that understanding evolutionary principles enables better foresight. 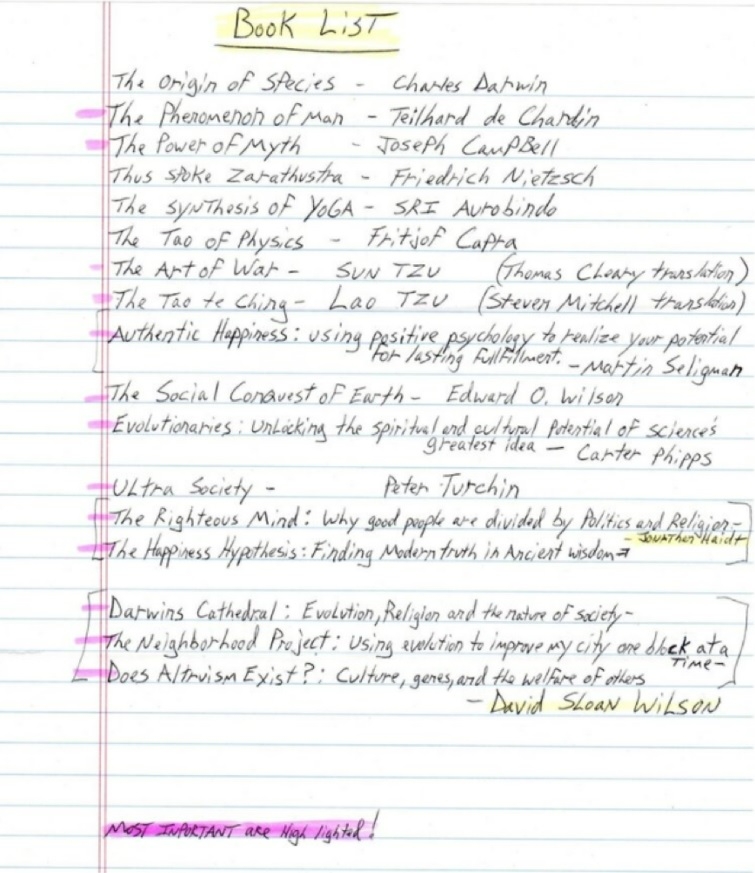 "Having a deep understanding of evolution’s principles enables you to see the root of a problem before the seed has even been sown," Shepherd said.

One principle in particular surprised him — that science has shown cooperation enables the long-term success of groups. This flew in the face of everything he'd been taught about the importance of competition and having a "survival of the fittest" mentality, he said, but matched up well with his own experiences in prison, which validated the power of cooperative advantage. He saw firsthand how inmates’ social structures and norms helped to keep rogue troublemakers in check.

After gaining a basic understanding of evolutionary principles through reading, Shepherd connected with renowned evolutionary biologist David Sloan Wilson to dive deeper into these concepts. Through a series of phone calls and mail conversations, Shepherd learned that patterns undergird evolutionary processes. For example, studies on multi-level selection show that altruism and cooperation provide evolutionary advantages to groups, enabling them to perform more effectively than uncooperative groups.

"Groups that know how to cooperate effectively will persist by outperforming groups that can’t get along,” Shepherd said.

He also discovered the work of the late ASU Regents Professor Elinor Ostrom. Her Nobel prize-winning research studied how groups around the world successfully manage depletable shared resources, like pastures and aquifers.

"Gary recognized that her findings could serve as a model for how to design an effective reentry program," Castillo said.

Shepherd talked about how he used these prosocial principles to guide his informal leadership in prison.

He told students that he began by looking for people who behaved altruistically, then he started conversations with them about what might be possible if they worked together to create a peer education program. As the group grew larger, he made sure that everyone had a voice in those discussions and that decisions were made fairly and transparently. After getting formal approval for the program from prison administrators, he began co-creating and piloting the classes. As they were found to be effective, the program grew and was replicated at other sites.

“I found it interesting how leadership principles were implemented into such a changeable environment," graduate student Alex Homer said. "The talk demonstrated how power balance is always in flux and that leadership doesn't always have to be a top-down process.”

“Shepherd’s story exemplifies adaptive and servant leadership," Castillo said. "He mobilized diverse people to work cooperatively for the greater good while simultaneously developing their resilience in the face of adversity.”

Shepherd was granted early release in 2021 after serving 30 years in prison, in large part due to the support of his prosecuting attorney. He’s now working on reentry projects in Phoenix and Tucson, incorporating prosocial principles there, too.

He concluded his talk by connecting evolutionary principles to ancient spiritual traditions like Daoism.

"By understanding the advantages that cooperation confers to groups, such as stability and enhanced capacity in the face of change, Gary has tremendous confidence in the future," Castillo said.

“I was really impressed with Gary Shepherd’s presentation," graduate student Kylie Kroeger said. "His perseverance for connecting and educating peers within the structured walls of prison shows his passion for evolutionary leadership. Even in the toughest environments, altruism can prevail, and with unity and cooperation there is a chance for change. There is no universal script for how to be a leader, and Gary proved that through hard work and dedication a leader can emerge from anywhere.”