ASU owl burrows get an upgrade

When a class of about 20 students arrives to plant prickly pear cactuses near their burrows on a weekday afternoon, an owl appears in a burrow entrance shortly afterward, peering out to see what all the fuss is about. The owls aren’t shy. Tom Lyons, director of campus facilities management, sees them every morning when it’s cool.

Pedro Chavarria, wildlife ecology lecturer in the College of Integrative Sciences and Arts, explains the point of the day’s field trip.

“The purpose is to make the habitat more suitable for burrowing owls,” he says.

The group is about 200 feet away from the nearest burrow. Chavarria splits the group in half. One group is to monitor and observe any owls that appear. The other digs and plants.

Plants that hold in humidity and provide a habitat for creatures the owls eat, like arthropods — which include insects, scorpions, spiders and centipedes — are ideal.

But if the cactuses are planted too close to the six burrows, the owls have a hard time seeing predators approaching. Their main threats are hawks and larger owls. They like open space where they can see things coming.

They’re tiny birds, only 9 or 10 inches when fully grown, with big yellow eyes and long legs. They produce a range of sounds: cooing, clacking, screaming. And they can mimic the sound of other predators, including rattlesnakes.

The curious owl seems to be satisfied the students aren’t a threat.

“He kind of has his wings spread out,” said Savannah Klein, a sophomore ecology major watching through binoculars. “He’s just looking.” 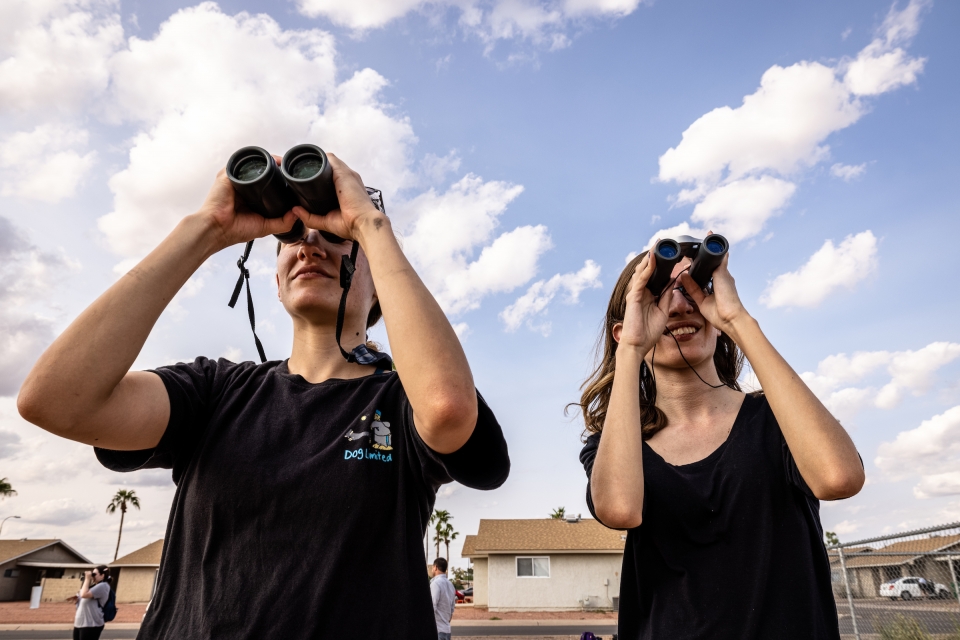 Third-year students Jennifer Kobs (left) and Larissa Campbell look for some of the burrowing owls during their Intro to Wildlife Management Lab on the Polytechnic campus Sept. 28. Photo by Charlie Leight/ASU News

“Wait about 15 minutes, then walk around to the other side of the burrow and see if his mate is there,” Chavarria says.

College of Integrative Sciences and Arts Lecturer Adam Stein teaches a habitat restoration course. His students selected the cactus species to plant for the owl habitat. Today it’s just a few cactuses, but Stein sees more vegetation in future, as well as a walking trail, some permanent binoculars and a shade structure for people to view it all.

“We hope this will serve as an umbrella species for some of the other Sonoran desert species,” he said.

The Polytechnic campus is home to skunks, rabbits, javelina, Gambel quail and coyotes. Someday this mostly empty patch of ground will support them as well.

“It’s nice to be out in the sun and smell the dirt after a year of being virtual,” Stein said. And to be watched by an owl.

Chavarria teaches his students how to plant a cactus (the hole needs to be wide and deep), add a little biochar to help retain water, add a watering tube to direct water to the roots and tamp the dirt down. 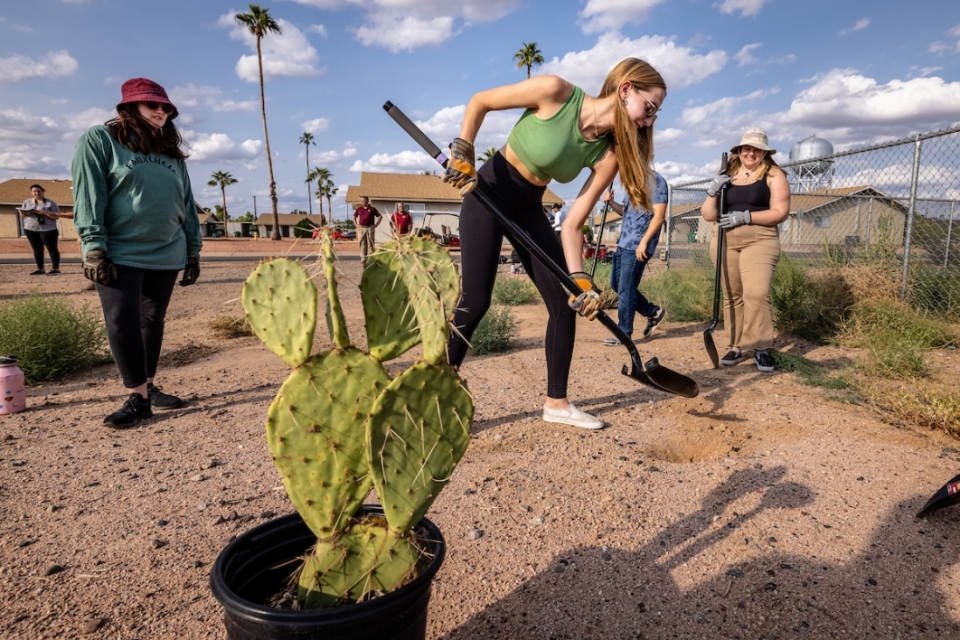 It’s about 45 minutes since the planting crew started. Two hundred yards south at another burrow, two more owls are up on perches 18 inches high, eying the action.

It’s a good spot for the colony, Chavarria said.

“It looks like they made the right call because the owls have stayed here,” he said. “They seem to like it and they've had chicks, so they're doing well.”

The groups have set up trail cameras in the area.

“It's important work because it gives us a baseline as to, you know, the kind of neighbors they might have, whether they're friendly or not,” Chavarria said.

Feral cats are a problem for burrowing owls, as are snakes. Both have been observed on the trail cameras but don’t seem to be having any effect on the birds. A burrowing owl sits on a perch on the Polytechnic campus on Aug. 26. Photo by Deanna Dent/ASU News

“One of the things that we're hoping to do with the cameras is to continue that monitoring — it's been ongoing since May — and just look at how vertebrae occupancy changes,” Chavarria said. “So as we start restoring the area to a more natural Sonoran desert environment — how does that change the number of species that are present, as well as the diversity of the species?”

Stein said the project is more than making a good home for the owls.

“I measure the progress, maybe not necessarily in the change of vegetation, but the amount of students that we’re influencing,” he said. “We can use this opportunity to work with the landscapes that work with owls, but also improve this for other aspects of ecology and coursework. One of the big measures of success, I think, has to do really with the amount of students that are interested, the amount of people that were getting out there on the ground, especially after such a hard year where there was really no ability to interact or get your hands dirty in a figurative and literal sense.”

About 20 cactuses have been planted to date, soon to be joined by native grasses and shrubs.

“And that won't even scratch the surface with the area that can be covered,” Stein said. “And so this means that the other students in the next semesters will also have that opportunity. Everybody gets to put a little bit of their fingerprints on the owl recovery.

“It's turned out to be wonderful. And it shows for me how these little marginal bits of land that are incorporated into the large matrix of humanity can actually serve as good biodiversity repositories and help link up these larger spots that we tend to think of as wildlife refuges official or unofficial throughout the landscape.”

MORE: Want to see the owls up close? Check out Owl-o-ween, hosted by ASU's College of Integrative Sciences and Arts at the Polytechnic campus on Saturday, Oct. 23.

Top image: Pedro Chavarria, a wildlife ecology lecturer with the College of Integrative Sciences and Arts on the Polytechnic campus, watches some of his Intro to Wildlife Management Lab students mix the nutrients they'll add to the dirt as they plant a prickly pear cactus near the campus' burrowing owl habitat on Sept. 28. The cactus will attract bugs and small food for the owls, yet it’s located far enough from the habitat to prevent predators from going unseen. Photo by Charlie Leight/ASU News