Growing up in New Mexico, Arizona State University Associate Professor Vanessa Fonseca-Chávez fondly recalls chasing after grasshoppers, trying to catch them so she could feed them to the chickens. She and her siblings rode four-wheelers, but she never learned to roller-skate or how to swim.

“There was a pool, but it was 30 minutes away,” Fonseca-Chávez said of the rural community of Bluewater, a small town between Gallup and Albuquerque.

“We would go into the mountains and go fishing. We’d get wood in the summertime, which we needed since we only had a wood-burning stove,” she said of the doublewide trailer she and her family lived in. “Often the pipes would freeze in the winter. But you bring in snow from outside, melt it on the stove, and now you have water to drink and bathe with.”

The 10-acre farm with ducks, pigs, chickens, a garden, cornfields and fruit trees that she grew up on seems very far away now. Fonseca-Chávez was recently promoted to tenure and is the associate professor of English and associate dean for diversity, equity and inclusion in the College of Integrative Sciences and Arts.

Also, in the span of a year, Fonseca-Chávez has published one book, edited another and been awarded a Whiting Public Engagement Seed Grant.

It’s only going to get busier for her. The $10,000 seed grant will jump-start a community engagement project examining how Hispanic communities in northeastern Arizona understand their idea of place, or querencia. She will focus on three towns: Concho, St. Johns and Springerville.

"I am so pleased that Vanessa’s research has been recognized by the Whiting Public Engagement Seed Grant and by her recent publications,” said Joanna Grabski, dean of the College of Integrative Sciences and Arts. “Her scholarship and interdisciplinary approach have been crucial to advancing studies in Chicanx literature and culture. She is thoughtful, resourceful and brings so many insights to her role as an educator and colleague on our leadership team."

During the grant period, Fonseca-Chávez will work with community partners on a Concho Catholic Cemetery digitization project. This will include storytelling sessions for the fall and spring, with the goal of gathering at least 25 oral-history interviews and transcribing them by the end of the grant period. The Apache County Historical Society Museum and local libraries are part of this effort to archive family stories, documents and photos related to family members who are buried in the cemetery.

Both of her books published last year — the edited collection “Querencia: Reflections on the New Mexico Homeland,” with Levi Romero and Spencer R. Herrera, and “Colonial Legacies in Chicana/o Literature and Culture: Looking Through the Kaleidoscope” — feed directly into this storytelling project.

The concept of querencia is complex. Fonseca-Chávez described it this way: “At a base level, it’s about an attachment to a place. But it’s also about how you gain resilience. How do you thread ancestral knowledge of that place and conceive of that place in the future? What are your obligations to the place and community?”

As an example of querencia, she tells the story of a man from St. Johns who was interviewed for an ASU Public History Collaborative grant she worked on a few years ago. 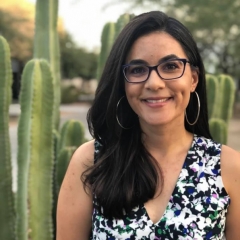 In her book “Colonial Legacies in Chicana/o Literature and Culture: Looking Through the Kaleidoscope,” Fonseca-Chávez discusses the impact colonialism has had on Chicano/Hispanic literary culture and production — that impact has made it essential for community members in northeastern Arizona to share their stories, legacies and culture through their lens, rather than someone else telling their stories.

“They are a grounded community. Their families have been there since the 1880s. They have been colonizers and colonized. They have experienced powerlessness and power,” she explained. “It’s about not brushing them off, but making them feel they have a voice and that it matters."

Fonseca-Chávez said that while working on the ASU Public History Collaborative grant, 20 to 35 people gathered in Concho to discuss their family’s migrations from New Mexico to Arizona. She said they were invested in righting the origins of their towns, like Concho and St. Johns. Many families, including her own, were sheepherders and moved around looking for water sources, settling eventually in northeastern Arizona. While they recognize that their families came from New Mexico, they have established their own culture and distinctions about their communities, like Concho green chili and St. Johns-style tacos.

Fonseca-Chávez said it’s important to acknowledge the larger histories and identities of rural communities. Identities in these rural Arizona communities may be fluid and numerous, she also noted.

“Sometimes they identify as Hispanic, sometimes Chicano if part of the movement. They might see themselves as Mexican,” she said. “Matthew 'Matías' Montoya described the many times he was discriminated against in St. Johns, saying it was ‘because I’m Mexican.’ They are veterans, college educated and office holders. They have a lot to offer.”

Sometimes rural and urban communities can be at odds with one another, especially with rural communities feeling left out when it comes to policy that affects the whole state.

Fonseca-Chávez says that in her book, “Colonial Legacies in Chicana/o Literature and Culture: Looking Through the Kaleidoscope,” she argues for communities to not look past each other. Her goal is for people to learn about the dynamics of Hispanic rural communities and how their shared experiences in rural environments can be beneficial to the work imagined together and in partnerships with other communities.

“When we went to St. Johns and Concho, we scheduled 16 interviews in two days. You could just go from one house to the other. We needed to schedule a lunch break, but they would just open their homes and feed us lunch. They would show us their prized possessions,” Fonseca-Chávez said of her time working on the ASU Public History Collaborative Grant. “Their willingness to share their stories, their homes and food with you — the students that were with me had never experienced that before.”

She said there is a lot people can learn from Hispanic rural communities, including expanding their understanding of how communities come together and tell their stories of querencia.

For Fonseca-Chávez, querencia is a journey of discovery that leads her to look at her family's history, her communities and her own desire to find a place, or many places, of belonging.

She says she misses the rural life she grew up with and that her alternate career would be a farmer. When she was in graduate school, she would go back to her parents’ home in Albuquerque and plant massive gardens. Now, she has a small garden planted in a wheelbarrow in her backyard with many plants, including aloe vera plants that had belonged to her late grandfather.

“There’s something about working with your hands. The work ethic instilled in you. About having to figure something out because you didn’t have all the resources,” she said.

Fonseca-Chávez believes that querencia, the sense of place and the resilience you build, stays with you, no matter where you go. She likes a quote from the late Chicana scholar Gloria Anzaldúa, who wrote in “Borderlands/La Frontera: La Nueva Mestiza,” "I am a turtle; wherever I go I carry 'home' on my back."

“About 10 years ago while we were living in Laramie, Wyoming, the pipes froze. So, I brought in snow, melted it on the stove, and my husband was like, ‘What are you doing? We can just go to the gas station for water,’” she recalled, laughing. “I was like, ‘Oh yeah, I can do that.’ But my instincts just kicked in.”