The mouse that roars

When Arizona State University President Michael Crow does his semester visits with students, he switches campuses. He usually draws a crowd, but when he visits the Polytechnic campus in Mesa, it’s literally standing room only. About 300 students pack the ballrooms where he meets them to capacity.

Polytechnic isn’t the newest or the biggest campus, but pound for pound, it punches way above its weight class when it comes to school spirit. The student body may be about 10% percent the size of Tempe’s, but it is a mouse that roars.

This year, as the former Air Force base turns 25, student leaders explain why the maker campus bleeds maroon and gold.

Cecilia Alcantar-Chavez attributes that to the campus’ size, “where it's like a small-town feel, but with all the resources that big university has.”

Alcantar-Chavez, a junior studying mechanical engineering, is starting this semester as president of Undergraduate Student Government Polytechnic. She grew up in small towns, where there’s a similar feel to the Polytechnic campus.

“Everybody just knows everybody,” she said. “You get to see the same faces. You get to have one-on-one interactions — talking to other people, other students who are from Tempe, or staff or faculty. The reason why they come to Poly is because they want to have that more one-on-one relationship with people. And they definitely find it at Poly.” 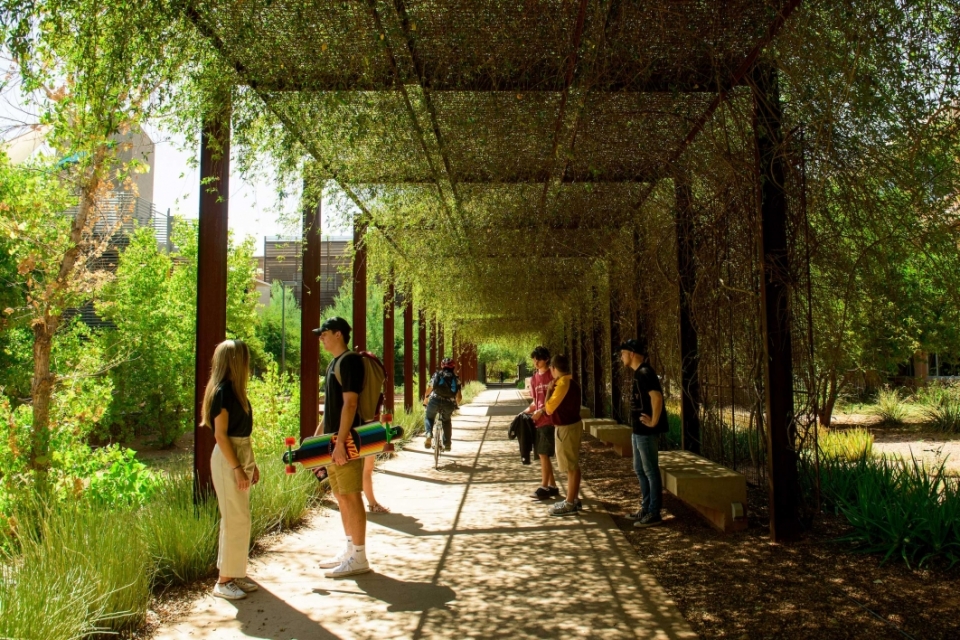 Students say they like the small-town feel they get at the Polytechnic campus. Photo by ASU

Alcantar-Chavez was the director of outreach for the Undergraduate Student Government and Changemaker Central, an organization that advocates for social change, for more than a year. She is also the president of her own club, Poly on Wheels, and is a member of Devil's Advocates and Fulton Ambassadors. She knew she wanted to get involved before she set foot on campus.

“One of my very good friends was actually in undergraduate student government,” she said. “So I heard a bit about it and I was like, 'I'll definitely do that.' Even before coming to college, I knew I wanted to get involved on campus. I had looked up a bunch of organizations, and what is really funny is Changemaker Central and Undergraduate Student Government were both on that list I made back before I even started my freshman year.”

Jake Okun is vice president of services for student government at the Polytechnic campus. A Scottsdale native, he went to a very large high school with a student body of about 2,300.

He chose mechanical engineering as his major, which is offered at both the Polytechnic and Tempe campuses.

“But after talking to the deans over there, I felt like the feel on the Poly campus was a lot better for me personally,” the sophomore said. “It was more of like a homey feel, and everyone had the opportunity to work on research and different things.”

Polytechnic students can be found in the maker labs at all hours, perfecting their crafts and using their new skills on projects. Hands on is the Poly motto, Alcantar-Chavez said. When you, your friends and your professor are all huddled over a lathe, that makes for a spirited campus. 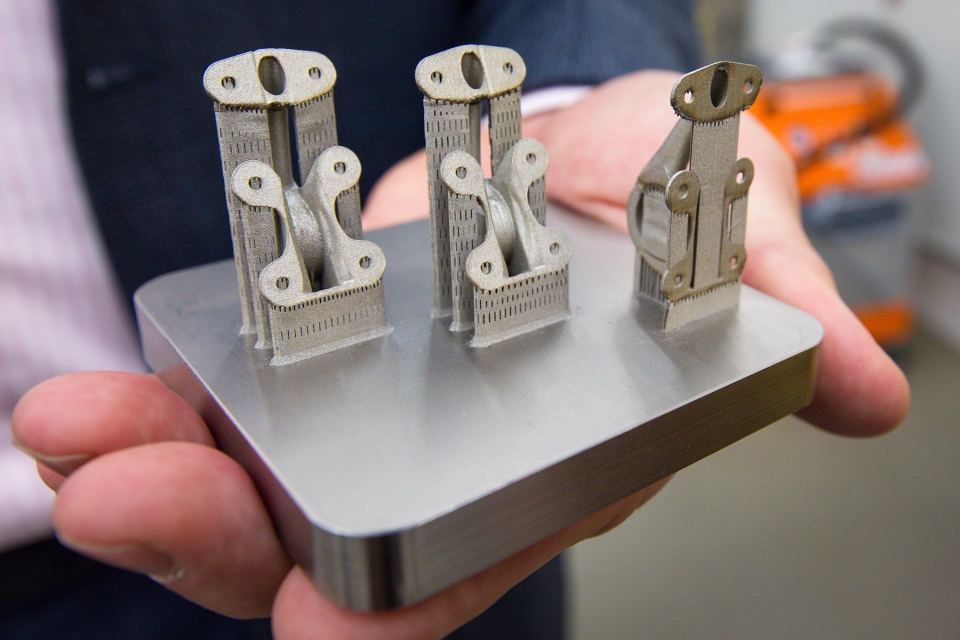 A metal 3D-printed piece made at the Technology Center on the Polytechnic campus. Photo by Charlie Leight/ASU

“It's because the students who are here are very passionate about what they're doing,” she said. “You get to have that hands-on experience with ... classes ... There's very much a connection with what the students want and need from their event programming. Just talking as an engineering student, there's so many hands-on things that you can do. There's the Innovation Hub. There's the Sim building where you can work on waves or mills or 3D printers. So I think it's the fact that you have those classes where you can be very hands on, where you get to do group projects and meet more people, where you're able to meet with your professors.”

The challenge for student leadership this fall is to welcome back two classes of students who for the most part have never been on campus and get them excited.

“Our goal is to create a lot of in-person events to get students more acclimated and ready to come back to campus, whether that's for the first-time freshmen or even the first-time sophomore who it's their first time being on campus,” Okun said. “We want to make sure that everyone feels included.”

Fall semester kicked off with Welcome Week events. Polypalooza, with carnival rides, a bounce house, popcorn and caricature artists, was held on Aug. 15. Party Technic, with roller skating and dancing, will also kick off the year. A sophomore special is being planned for the Monday, Aug. 23. 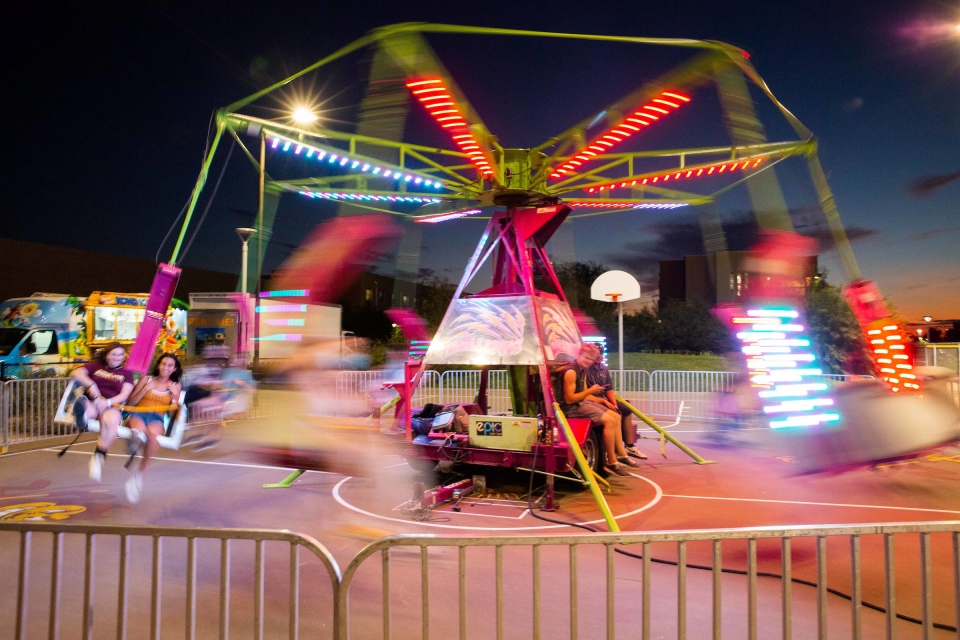 Students take a spin on a carnival ride during Polypalooza on Polytechnic campus on Aug. 15. Photo by Deanna Dent/ASU

A weekly Wellness Wednesdays will bring together different departments and organizations, providing therapy animals, a smashing booth and counselors on hand.

“We want to make sure that everyone feels included and special,” Okun said. “And just make sure they have an amazing year and they're ready to come to campus and be excited.”

Top photo: Kinesiology senior Cosette Reimann and her sister Savannah Reimann (left) knock down targets during the Polypalooza carnival on the Polytechnic campus on Aug. 15, 2021. Photo by Deanna Dent/ASU