Snakes? We're totally fine with them — just not at our house

Arizona! The sunsets. The saguaros. The snakes.

All of them are part of life in the sunny Southwest, but keeping cool when the latter is holed up in a golf bag, air compressor or swimming pool pump house is a big ask for a lot of people.

Not as big as you’d think, however.

The first study to analyze snake removals in a social-ecological context was recently published by an Arizona State University conservation biologist working with a local rattlesnake removal company.

“I think one of the surprises was that people don't hate snakes,” said researcher Heather Bateman of the College of Integrative Sciences and Arts. “A lot of them responded that the snakes are important to the desert ecosystem and the snake belongs in the desert, just not in my garage.”

Video of The snake rattles, the phone rings

Snakes were most frequently removed from neighborhoods with wealthier and more highly educated residents, a greater proportion of Hispanic residents and recently constructed homes.

Bateman studied the records from 2,000 snake removals in metro Phoenix between 2018 and 2019. More than 68% of removals were venomous Western diamondback rattlesnake, the most common species in the area.

The contact zone for rattlesnakes and other species tends to be on the Valley fringes, said Bryan Hughes, owner of Rattlesnake Solutions. He gets the most calls from north of the Loop 101 freeway in Phoenix, Scottsdale and Cave Creek.

“A lot of that (area) has this very deep penetration zone where you can find rattlesnakes miles into areas that have been developed,” Hughes said. “And that's just because of the way that the properties are developed. They leave natural waterways in place. They tend to use xeric landscaping on larger lots.” 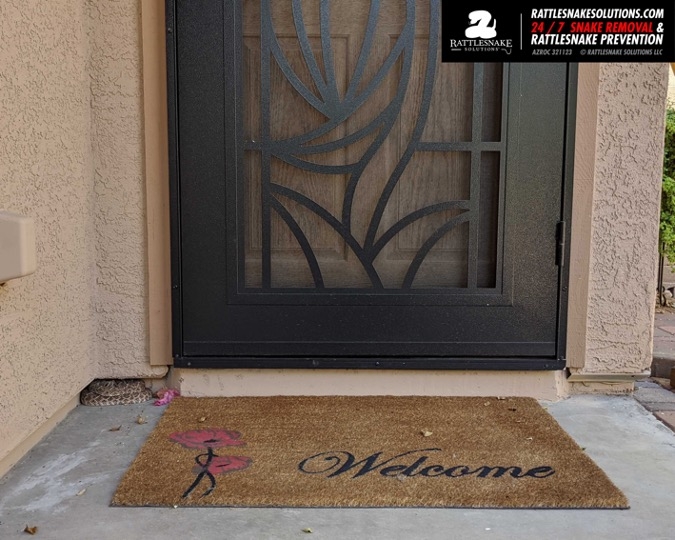 An unwelcome visitor curls up next to a welcome mat at a Valley residence. Photo courtesy Rattlesnake Solutions

They also turn up in Phoenix around the mountain preserves. “That contact zone is razor thin,” he said. “It's basically just that first row of houses that surround those parks.”

“That might indicate that there is an understanding that snakes play these important roles in ecosystems and maybe they're OK to be left in place or handled a different way,” Bateman said. “Maybe it's because … they understand the positive benefits of snakes and are less concerned and maybe decide against removal.”

Snakes rarely get inside houses. If they do, they came in through an open door, Hughes said.

“We do have a lot of people that move here from cooler environments where a nice spring day means you leave the back patio unlocked and open a little bit and rattlesnakes will come in there occasionally that way, but very rarely,” he said. “Most of the time when we get snakes at people's houses, it's in the backyard or the front yard where a lot of the landscaping, as the paper shows, is something that can be useful or mimics in some ways native landscaping that they use.” 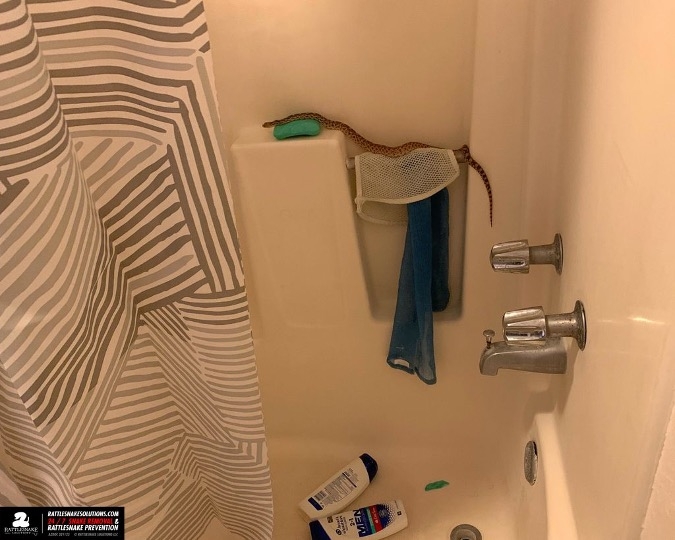 According to Bryan Hughes, finding a snake inside a home is rare, but not impossible, as this bathing beauty shows. Photo courtesy Rattlesnake Solutions

Hughes grew up in Idaho catching snakes for fun. He moved to Arizona 22 years ago.

“My interest in snakes changed from garter snakes to rattlesnakes at that point,” he said.

He has been in business for about 10 years. He has about 25 employees positioned around the Valley and Tucson, who can usually show up for a call in half an hour.

“We have a massive data set just because we're out there and able to collect a lot of information,” he said. “So I'm really excited about this type of collaboration.”

The amount of data Hughes had on hand was a delight to Bateman.

“There's a lot that ecologists can gain and by partnering with the business community,” she said. “What a great relationship to pair scientists with this business who also is using science. They understand their snakes. And they're contributing to what we know just about the natural history of these species. … If I look at other sources of information of snakes in Maricopa County, I can go to the scientific literature and there's a couple of papers. And they studied snakes for years. They used road writing surveys (where biologists walk or drive down roads and record what they find) and other types of surveys. And they found on the order of hundreds of snakes, not thousands of snakes.”

The published study will be of use to Hughes in his work as well.

“One of the biggest things that I saw that is going to have a lot of use for me just dealing with the public is the fact that how people felt about snakes was not meaningfully impacted by whether or not it's an area that a lot of snakes are removed,” he said. “I've always thought that our culture has a lot to do with whether or not people feel positively or negatively about snakes. And a lot of what's in there suggests that, which gives me a lot of lessons about how, when I'm talking to somebody that is scared of snakes, how I can talk with them and how I might be able to change their mind.”