October 26–29 is Virtual Study Abroad Week at Arizona State University, and instructor Emel Topal has been thinking a lot these days about international and U.S. students whose plans to study out-of-country are on hold because of the COVID-19 pandemic.

Topal, who was honored in September with a College of Integrative Sciences and Arts’ Outstanding Teaching Award for 2019–2020, said the recognition has inspired reflection about how she came to be a college teacher, her serendipitous path to the U.S. and ASU, and how those decisions and experiences — especially studying abroad — have shaped her life.

“My own story, I think, is one that can be encouraging to students, to give them hope and to try their best, even though they may need some patience at this time,” said Topal, who is from Turkey and came to the United States in 2003 after earning her master’s degree.

What decisions led her to Arizona and ASU’s Polytechnic campus?

Immersed in the teaching life

Topal knew early on in life that biology, teaching and a career in academia were for her.

“My parents were teachers and always worked in underserved areas, so that’s where we also lived. With no TV, electricity or running water, I was always outdoors, exploring nature and digging into ant communities, making posters about the ant life cycle for fun,” she recalled.

“I also saw from my mother, especially, how one teacher could make a huge difference in people’s lives. At one point we were in a rural area of Turkey where girls didn’t go to school,” Topal said. “She started an evening program to teach women and girls of all ages who didn’t know how to read and write.

“I was 6 or 7 at that time. I remember going door to door with her as she explained the program to parents and husbands and have fond memories of doing my homework with my mom teaching in the background, and sometimes reading with her students,” she continued. “We learned together, and the ladies were so loving and affectionate. It was amazing to me that my mom did that and it sparked an interest in me.”

With that background, it wasn’t a surprise to her family when Topal chose to study biology at Istanbul University with an eye toward teaching. Along the way she decided that teaching at the college level would be best, so she completed a master’s degree in biology at Abant Izzet Baysal University and applied to their doctoral program.

“But I had found it was very hard for me to write my master’s thesis,” Topal explained, “because I was translating word by word research articles written in English. So I decided after defending my thesis to defer my doctoral admission and put focus on learning English.”

Though she looked first for resources and opportunities in England to be closer to home, she happened upon the exciting work of pioneering researcher Charles Arntzen, who had joined ASU in 2001 as founding director of ASU’s Biodesign Institute.

“His focus on infectious diseases and making edible, plant-based vaccines, connected strongly with the ideals I grew up with, and offered great potential for overcoming health barriers in the development world," Topal said.

She wrote him a letter, saying she would like to learn English at the university and volunteer in his lab.

Arntzen responded, suggesting she might have more hands-on lab opportunities at that time working with his research colleague Hugh Mason, still at Cornell University, and made that introduction.

“I was getting ready to enroll in classes at Cornell, when Dr. Mason decided to join ASU,” said Topal, who changed her plans accordingly and came to Arizona.

“If you’ve seen the film ‘The Terminal’ with Tom Hanks, that was me when I arrived in the U.S.,” laughed Topal. “I couldn’t answer questions in basic conversation.”

But after a few weeks of English classes and observing in the lab, she was hired on as a student worker.

“They were just beginning to set up the lab and had no technician at the beginning for a short time. I cleaned equipment, prepared media, and ordered supplies. When classes finished I’d go and stay until late, trying to make sense of everything,” she said. “I really appreciated that Dr. Mason gave me that opportunity.”

As the end of her six months of ESL classes approached, she met with Mason to let him know she would be returning to Turkey in a month or so.

“He told me that he actually had some news to talk with me about — he said he’d gotten a grant on which I could contribute and receive funding: Would I consider staying and doing my PhD at ASU instead?

“I liked the lab and the research, so I was ecstatic!” she recalled.

The next step was convincing her parents.

“I traveled home to talk to them in person, after I’d already taken the GRE and TOEFL and had been accepted for admission!” she emphasized. “They didn’t like that I’d be so far away, but they understood the benefits — I’d gotten a scholarship and would be working on vaccines in a world-famous lab. They were happy for me, but sad I’d be gone so long.”

Topal, who married during the last year of her doctoral work, wrote her thesis soon after their first child was born. Her dissertation described her research in creating an effective vaccine for preventing Escherichia coli O157:H7 intestinal attachment and colonization, the primary cause of acute renal failure in children, and she shared her results in a variety of journals and conferences. 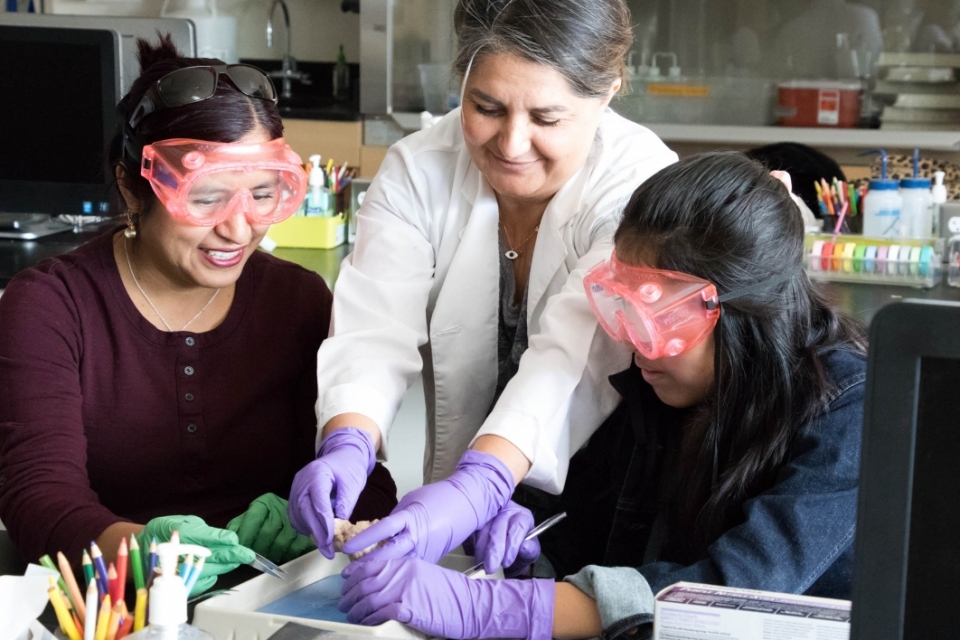 After completing the degree in December 2010, she taught part-time at Chandler/Gilbert Community College for four years. After her second child was born, she returned to ASU in 2016 as an instructor in the College of Integrative Sciences and Arts, where she teaches Human Anatomy and Physiology, Medicine and Culture, and occasionally microbiology labs.

Whether teaching a class of 25 or 125, Topal said she loves getting to know her students.

“I’m always encouraging them to come to office hours, and often students will stay after class an hour or more to chat. We have a lot of students from the Middle East earning degrees based at Poly, and they want to ask me about my immigrant experience and how I learned English.”

Many of her students are planning to go on to medical or dental school and Topal serves as faculty lead for the Pre-dental Club at ASU Polytechnic campus.

“They ask me for a lot of reference letters for graduate and professional schools,” Topal said. “I encourage them to talk with me a little each week, so I know what’s going on in their lives and will know them well enough to write a strong letter of recommendation. I’m happy to be part of their journey.”

It’s apparent from recent student evaluations that her emphasis on making personal connections with her students is something they appreciate and that contributes to student learning and affinity.

Here are some quotes from her students:

"Dr. Topal is not only very intelligent and knowledgeable in the subject matter and a great teacher, but she is also extremely kind, sweet (and sassy!), personable, funny, down-to-earth, enthusiastic, and just a fantastic professor to work with overall. Her willingness to slow down, reexplain concepts, ask for student feedback and take it into account, makes the experience even more effective and enjoyable … You can tell that she cares about each individual entrusted to her… Dr. Emel Topal is a much-appreciated gem at ASU!"

"I LOVE PROFESSOR TOPAL SO MUCH!! I honestly cannot say enough nice things about her… she is SO kind and caring. She truly wants her students to succeed and is so patient. She is so helpful and tries to make the class as doable as possible.

"Dr. Topal is one of the best professors that I have had at ASU. She really cares about her students and wants everyone to do well in the class. She is accessible outside of class and encourages students to seek help if needed. The course material was difficult as expected, but very interesting at the same time.”

When Topal is not teaching at ASU, you’re likely to find her, well … teaching.

She volunteers in classrooms at her children’s elementary school, bringing in skeleton models and talking about human bones, as well as at Wesley Community and Health Center in Phoenix, which offers activities for kids ages 5 to 14. She also regularly leads workshops at ASU Polytechnic campus to encourage girls in science.

Topal and her family normally visit Turkey each summer and during those visits she volunteers in the primary and middle school where her extended family lives.

“My sister used to teach English in an American cultural center in Turkey, so she’d enlist me to come be a conversation partner and I’d bring my kids.” Emel Topal, with her son and daughter, race with College of Integrative Science and Arts dean Duane Roen to assemble lab skeletons as part of the ASU Open Door at Polytechnic campus in 2019. Topal makes it a point to include her children in her volunteer STEM activities. Photo courtesy of Emal Topal.

Connecting to other cultures

Her advice to students who yearn to travel and study in other countries but can’t just yet?

“Be open to learning about different cultures and languages from where you are. Search out student clubs. Consider being a nanny for a family from another culture,” Topal said. “Even spending a short amount of time visiting another country virtually on YouTube, you quickly realize that not everyone looks at the same issue through one window.

“You’ll take something from that culture and synthesize it and give you a different perspective. That’s how you grow. When you get out of your comfort zone, whether it’s something little or big – it’ll definitely give you a chance for growth.”