The healing hand of literature

Arizona State University Professor Jewell Parker Rhodes believes that out of the COVID-19 pandemic, America needs to have a reboot on race, climate change and income equality.

She also believes that literature is a good place to start having that conversation.

As the founding artistic director of the Virginia G. Piper Center for Creative Writing, Rhodes has been writing books about lost historical narratives for more than three decades.

“Words have the power and can change hearts one reader at a time,” said Rhodes, who teaches “Ethnic Literature” in the College of Integrative Sciences and Arts.

Rhodes' successful book “Ghost Boys” led to a recent “Today Show” appearance and is a New York Times best-seller — again. The 2018 book addresses race relations and police brutality and is finding a new audience in light of the George Floyd protest movement. ASU Now recently spoke to Rhodes about the role literature can play in society. 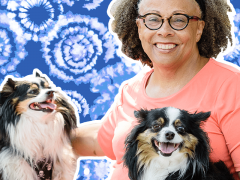 Question: Why have you chosen to write about race and racial bias over the course of your 35-year career?

Answer: From childhood through college, I was never once assigned a book by a person of color. Driven by my desire for representation and interest in uncovering historical narratives that have been suppressed, I was inspired to write about race and bias as a way to uncover my own cultural roots and to share a fuller picture of American history with all.

Q: You’ve written five adult novels but in the last decade, transitioned to novels for youth. Why the switch?

A: I’ve always wanted to write for youth. As a child, even though characters didn’t mirror me, books taught me values of justice, honor and resilience. Fiction fosters empathy. The imaginative connection between one’s self and a character allows youth to vicariously experience events, emotions that can affect identity. Encouraging critical thinking, exploring cause and effect, asking about motivations and best reactions to racial prejudice all lay the groundwork for great discussions. My stories model various life pathways and affirm choices that nurture loving acceptance of oneself and others.

Q: Do you see the post-pandemic world as an opportunity for growth?

A: I feel an even greater urgency to “bear witness” against injustice. Many children don’t know how Emmett Till’s murder served as a catalyst for the civil rights movement. My novel “Ghost Boys” reminds youth that they, too, can “be the change” and continue advocating against racism and racial bias. George Floyd’s murder has heralded a second wave of civil rights advocacy. “Magic City” is my novel about the 1921 Tulsa Race Massacre and provides context for understanding ongoing oppression post-slavery and how militarization of white supremacists and police are antagonistic to tolerance and peaceful protest.

Q: We’re coming up on another anniversary for 9/11, which reminds me of your book “Towers Falling.” What does that book suggest for a better America?

A: For young people who weren’t alive during 9/11, I created “Deja,” an African American girl who’s homeless because of her father’s continuing trauma and lack of access to medical care; Sabeen, a Muslim American girl who’s stereotyped because of her faith; and Ben, the son of an Army serviceman who suffers from PTSD. Becoming the best of friends, these three characters learn that faithfulness to our founding documents — the Declaration of Independence, the Constitution and Bill of Rights — will keep our nation striving to fulfill its promise of equality and justice for all. Health care, housing, and income inequalities affect all three characters, but they affirm how resilience, activism and a commitment to our values can make life better for citizens. As Deja writes, “I love my American home. We are a family … ”

Q: How has the unrest and turmoil of 2020 impacted your writing these days?

A: I feel a powerful urgency and I’m writing faster. I just finished "Paradise on Fire," a novel about climate change. I’ve begun an adult and youth novel, and I’ve drafted a picture book. The pandemic has crystallized my need to use stories to improve lives and, I hope, remind readers of our common humanity. I’m hopeful, not hopeless about the future.