Last Saturday, about halfway through Part 1 of the ASU Center for the Study of Race and Democracy’s two-part Impact Arizona lecture series titled “Race, Crisis and the Future of Democracy,” which was organized in the aftermath of the May 25 police-involved killing of Minneapolis resident George Floyd, the New York Times sent its subscribers a news alert that yet another black man, 27-year-old Rayshard Brooks of Atlanta, had died at the hands of law enforcement.

“It’s exhausting,” said Lauren Quinlan, an undergraduate at the Walter Cronkite School of Journalism and Mass Communication and a panelist at Saturday’s lecture. “And I’ve been feeling this exhaustion since 2015 with Sandra Bland.”

Throughout the course of their virtual discussion, led by Center for the Study of Race and Democracy Director Lois Brown, they covered, among other things: the growing fear and distrust of police, the inevitability of exhaustion and the need to keep forging ahead, the loss of a middle ground on issues of race, the kinds of systemic changes needed and how to be an agent of change, and the role and responsibilities of the public and journalists in documenting police brutality.

Now available to view on the center’s Facebook page, the lecture followed a two-part Q&A format, with Brown asking questions of the panelists in Part 1 and panelists taking questions from the audience in Part 2. She began by welcoming roughly 700 participants who had joined via Zoom from countries around the world, including Ghana, England and Russia. From there, Brown detailed a macabre list of the known victims of police-involved deaths in the U.S. in recent months: Ahmaud Arbery in Brunswick, Georgia, on Feb. 23; Breonna Taylor in Louisville, Kentucky, on March 13; Dion Johnson in Phoenix, on May 25 — the same day as George Floyd.

“This is not normal, nor should it be normal. There is collateral violence from all of these … unnecessary deaths,” Brown said before inviting James to give her take on the nature of the crisis we are grappling with today.

“We are reeling from a dual pandemic,” James said. “One of racism and one of COVID-19. But they are also intertwined in ways we have not thought about … (ways that do not) recognize the socioeconomic aspect of this pandemic that people of color are … drowning in.”

Privilege, the panelists agreed, has a lot to do with that inability to recognize injustices. However, some argued that the erosion of a middle ground when it comes to racial issues is helping to force people out of their places of privilege to truly consider where they stand.

“All these policies and false justifications behind them are showing that right now, you’re either for equality or you’re not,” Quezada said. “You either believe that black lives matter or you don’t.”

Troubling to James was a report she said she'd read recently that the police union in Minneaopolis intended to fight for the jobs of the cops involved in Floyd's death, which she cited as an example of how blanket policies can serve to protect those who have done wrong.

“I get very concerned when we talk about things from an individual perspective, i.e., ‘There are a few bad apples in the police department, and that if we just let the good ones be in charge, it would be better all around,’” James said. “I think these problems are much more embedded than that. It isn’t a matter of a few bad apples. What it is, is a matter of policies.”

Quezada pointed out that unions are not inherently a bad thing, but that the lack of officer accountability that some unions allow is the real issue. Glover, who has over two decades of experience in law enforcement, proposed a couple potential solutions for this: requiring police officers to be licensed, meaning bad behavior could cause them to lose certification, and changing who’s in charge.

When it comes to systemic change, James argued that it needs to go further than the criminal justice system.

“That’s true for all institutions in this country,” she said, including education. James praised ASU for its School of Social Transformation and School of Transborder Studies — which teach courses on everything from African and African American studies, to women and gender studies, to Asian Pacific American studies, to Chicano and Latino studies — but added that because these areas of study are also American history, they should be interwoven into other disciplines as well. Brown called it “a decolonizing of curriculum.” 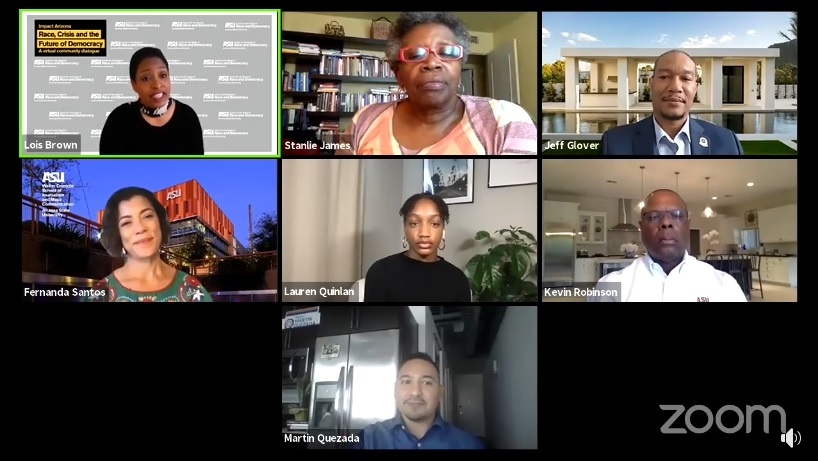 On the topic of how to be an agent of change, panelists were in complete agreement: In order to change the system, you need to be a part of the system.

Both Robinson and Glover reported there were several times throughout their careers in law enforcement when they were the only black man in the room.

“I am a strong believer that the more diverse an organization is, the more capable it is to deal with issues,” Robinson said. “There’s a statement my wife says: One is a token, two is a support group and three is a consensus. When we talk about being the only one, you can only do so much as the only one. But as you get more folks like you … when you add more diversity to the room, you can get so much more done.”

Glover felt the same way, saying he took conscious steps as he moved up the ranks to make sure he was assisting in the recruitment of people of color and creating opportunities for their future success.

“We bring a unique perspective of our own when we get into law enforcement,” he said. “I was black before I got here, I’ll be black when I leave. That will never change. And that perspective needs to be in the room. … If you’re’ not at the table, you’re on the menu.”

Santos took that sentiment a step further. The first Brazilian to join the staff of the New York Times, she said it can be easy for an organization to get comfortable once they have hired one or two people of color. So instead of joining their table, she said, “More and more what I’ve been thinking is maybe we should create our own table and have white people come and join our table and hear our diverse perspectives.”

Quezada encouraged those who want to be good allies to take the lessons they learn in those kinds of exchanges and be courageous enough to incorporate them into their personal lives.

“Sit down and talk with your family and friends at dinner about this,” he said, while also acknowledging the burnout factor (a burden that weighs decidedly more on people of color already). “You don’t have to be physically present at every protest in order to support it. You can spread that information on social media, to your colleagues, co-workers, family. A lot of time, that’s the most powerful way to spread the message.”

And James cautioned about expecting people of color to do the work of educating others.

“A question I often hear from white people is what is it they can do?” she said. “I think they have to be very careful about asking that question. Because the assumption is the person who is experiencing the oppression has to educate you so that you can do the right thing. It’s bad enough to have to experience it, but then to have to turn around and teach someone what to do; it’s a bit much.”

But it’s really not that hard to educate yourself. James suggested reading books like Robin DiAngelo’s “White Fragility” or Ibram Kendi’s “How to Be an Antiracist.” And of course, pay attention to the news — but be sure to vet your sources.

The lecture concluded with Brown asking each panelist to pose a final question for the audience to consider:

James implored the audience to continue looking for more information and asking what else they could learn.

Robinson wants people to get comfortable asking people in positions of power to help them understand why things are the way they are.

Santos said that instead of focusing on our differences, we should be focusing on what we have in common, and asking how we can go from there to a place where we can find solutions.

Quezada had two questions: Citing calls to defund the police, his first question was do things really need to be the way they are right now and are we having an open mind about what they could be? The second question he suggested people ask themselves is whether they are satisfied with just having a race-neutral perspective or whether they feel they should work on being actively antiracist.

Glover echoed both Robinson and Quezada, asking the audience to ponder the kind of police department they want for the future.

And like Quezada, Quinlan had two questions: Are you willing to continue to fight for those who are disenfranchised because of the color of their skin for as long as it takes? If you are a person in a position of power, how can you use your privilege to make a difference?

“I think we’ve come out of this conversation with an understanding that it’s a long conversation, that this is not an instant fix and the call to action is one that will just continue to reverberate,” Brown said. “Part of what we are hoping is that we will carry the momentum from this conversation into Part 2.”

The event will take place via Zoom and is free and open to the public. Register here.