The soul of the Phoenix art scene lives on(line)

The notion of the artist as a solitary being is not entirely inaccurate. Some degree of isolation is certainly necessary for any endeavor that requires deep contemplation and reflection. However, it is also true that art cannot live in a vacuum if it is to have meaning — it must be shared and interpreted.

So when social distancing measures imposed an unwelcome degree of solitude on everyone this spring, Arizona State University Principal Lecturer of English Rosemarie Dombrowski knew she had to act to help keep the artistic soul of downtown Phoenix alive. 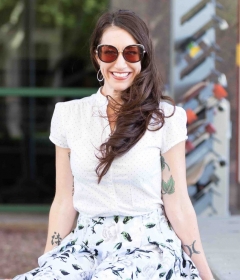 Dombrowski, the city’s inaugural poet laureate, is a founding editor of Write On, Downtown, an annual literary journal that celebrates the written word and other forms of imaginative self-expression coming out of the metropolis she loves. After 13 years of existing as a strictly print publication, Write On, Downtown went digital with its 14th issue this month. Building the website to host it was a feat Dombrowski accomplished in just one week.

Not only is the journal now accessible to anyone online, Dombrowski and her fellow editors, all ASU students, hosted a launch party last Friday via Zoom, wherein several of this issue’s contributors read their pieces and some shared about themselves and their inspiration.

“I feel like creatives are such an important part of the community, not just because of the art we create … the energy, the passion — those are the things that are so important right now,” Dombrowski said during the virtual launch.

Beginning in 2017, Write On, Downtown began making the transition from a student-focused journal to one that welcomes submissions from anyone in the community. And not just writers; this most recent issue features profiles of drag kings, muralists and historians, as well as work by rappers, stay-at-home moms and students of Osher Lifelong Learning Institute at Arizona State University, an entity that provides noncredit, university-quality learning experiences for adults ages 50-plus, where Dombrowski also teaches.

Cronkite senior Alyssa Klink, one of the student editors this semester, profiled two people for the issue: Marshall Shore, also known to Phoenix residents as the “Hip Historian,” and Jeremie “Bacpac” Franko, the “punk painter of Phoenix.” Luckily, she and the other student editors finished interviewing their profile subjects just before quarantine became necessary. Then, over the course of the final month of the spring semester, they met on Zoom with Dombrowski to finalize design and layout and address any remaining issues.

Klink, a native of Maryland, has lived in the Roosevelt Row arts district of Phoenix for the past four years.

“The culture of the Southwest is really beautiful and unique,” she said. “It’s an amazing kind of art culture that I haven’t seen anywhere else I’ve ever been.”

During Friday’s virtual launch, Klink introduced Shore, who joined the Zoom meeting from his car, parked outside Antique Sugar, a vintage clothing shop on the northeast corner of Second and McKinley streets where he had just dropped off some donations. Established in 2010, the business is quite a bit younger than the historical tidbits Shore shared with attendees: one about Adeline Gray, whom he called one of Phoenix’s first female leaders. In the 1890s, Gray lived in a now-demolished mansion at the corner of Seventh and Mohave streets, which served as the center for such social gatherings as weddings, funerals and births. And one about Nicolai De Raylan, a transgender pioneer who died in Phoenix in 1906 and was buried, without a headstone, in a dress, despite living his life as a man. Shore, project manager for the Arizona LGBT+ History Project, was part of an effort to restore De Raylan’s story and identity by installing a proper headstone at his gravesite.

Shore hosts a weekly Arizona History Happy Hour every Thursday at 7 p.m. on Facebook for those interested in learning more about local history.

Also featured during the launch were Phoenix rappers Russell Prim, a journalism and mass communications student at ASU who goes by the stage name Rozotadi, and Sean Avery, who read from a piece that described living in a city so hot that “folks can’t breathe,” but that also “births the most resilient souls.”

In the past, Write On, Downtown launch parties have been held at the end of each spring semester at the independent Changing Hands Bookstore in Phoenix, accompanied by hors d’oeuvres, libations and plenty of mingling. While Dombrowski lamented not being able to break bread with attendees at this year’s launch, she was just grateful they were able to find a way to continue celebrating the vibrancy of the Phoenix arts scene.

“This is a really special issue for us,” she said. “Out of the 14 issues, this is the one that I will not forget.”

Top photo: Skateboarders in downtown Phoenix photographed for the 2017 issue of Write, On Downtown. Photo by Carlos Monge