Raising a fist for change

Fifty years after his shocking protest against racism on the medal podium at the Olympics in Mexico City, John Carlos has seen the vicious backlash he endured at the time evolve over the decades into admiration and respect. But he sees his legacy not as an individual act.

“We made that statement because we wanted to be that beacon for society, the blueprint,” he said.

Carlos, along with U.S. Olympic teammate Tommie Smith, raised black-gloved fists during the playing of the national anthem during the medal ceremony for the 200-meter race. Carlos won the bronze medal, and Smith won the gold.

“I look at my life as castor oil. It doesn’t have to taste good for it to be good for you," said Carlos, who spoke at a talk called “Raising a Fist to Taking a Knee,” sponsored by two Arizona State University units — the Global Sport Institute and the Center for the Study of Race and Democracy. The event, held at the Phoenix Art Museum on Tuesday night, marked the 50th anniversary of the 1968 Mexico City Olympics.

After their protest, Carlos and Smith were sent out of the Olympic Village and faced years of repercussions, including death threats. But Carlos recalled how, at age 23, the activism he shared wasn’t about himself.

“I was thinking about how I would make life better for my kids and my kids’ peers,” he said.

Also speaking at the event was Harry Edwards, a sociology professor who founded the anti-racism Olympic Project for Human Rights in 1967. Smith and Carlos were part of the organization and wore OPHR patches on the podium. Edwards said one of his regrets was not involving female athletes more deeply in the movement.

Wyomia Tyus, who won two gold medals in Mexico City and was the first person to win back-to-back gold medals in the 100-meter sprint, said the achievements of herself and other black women were diminished in that era. Few reporters were interested in interviewing her.

Also overlooked was her own voice at the Olympics, when she wore black shorts as part of the protest and dedicated her second gold medal, for being a member of the 4x100 relay team, to Smith and Carlos.

“I wasn’t looking for it to be about me,” she said. “I would like for people to think I was a woman who gave a lot to human rights.” 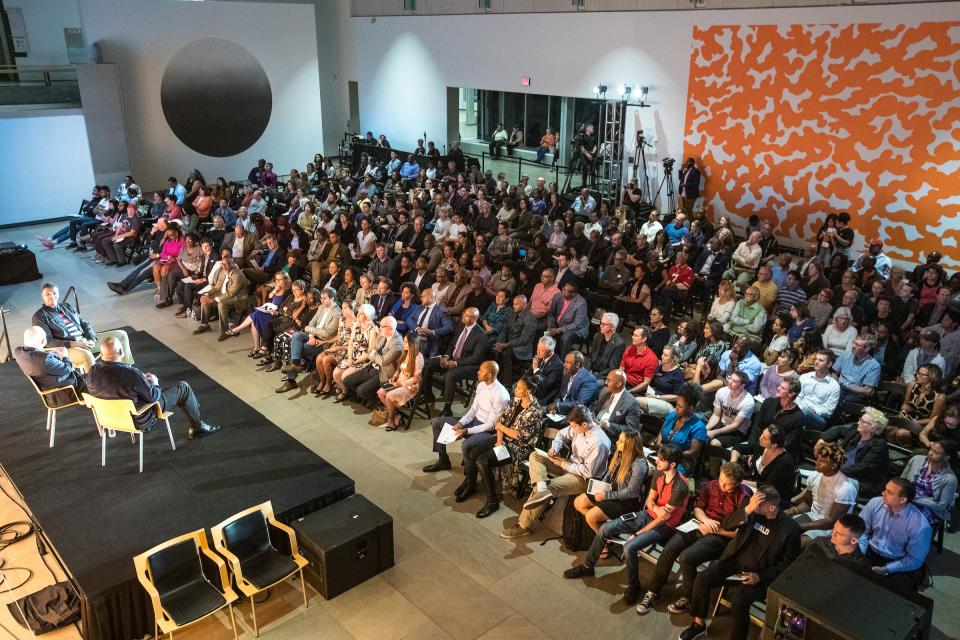 Around 500 people attend the "Raising a Fist to Taking a Knee" event Tuesday evening at the Phoenix Art Museum, a 50th-anniversary commemoration and conversation about the 1968 Mexico City Olympics and the influence of athlete activism then and now, put on by Global Sport Institute, in partnership with the Center for the Study of Race and Democracy. Photo by Charlie Leight/ASU Now

Edwards said he always believed that the civil rights movement should be inclusive. That’s why, when the Harvard University rowing team asked to meet with him, he agreed. They showed up during his office hours, in suits. The Harvard team was selected to represent the U.S. in the Olympics rowing race, and the coxswain, Paul Hoffman, wanted to join the Olympic Project for Human Rights.

Hoffman told the crowd Tuesday night that the Harvard students were aware of the political firestorm in 1968.

“We were training for three years to get into the Olympics, but we weren’t removed from newspapers and the fact that classmates and others were being sent off to Vietnam,” he said.

“There was a very large aspect of not wanting to be embarrassed or shamed by inaction.”

Hoffman told Edwards he would write to every member of the Olympic team and try to start a conversation about racism.

“One of the alarming things to me, in retrospect, is ‘you dropped the rock in the well and you never heard the splash,'" he said. His letters drew no reaction.

Hoffman is perhaps best remembered as the man who gave his OPHR button to Peter Norman, the Australian sprinter who won silver in the 200-meter race and wore it while standing on the podium alongside Smith and Carlos. Norman also faced a severe backlash afterward.

“There are no final victories, but with all of these things we went through, we came out better.”
— Harry Edwards

Gina Hemphill-Strachan, a TV producer and ASU alumna, talked about her grandfather, Jesse Owens, and how he was reluctantly pressed into asking the black athletes in 1968 to refrain from protesting.

“He understood what the black athletes were feeling,” she said. “But he was in a position where he was sent there to try to get them to change their minds, but knowing once he got in there that there wasn’t going to be any change.

“What he shared with us and what I learned throughout the years … was the strength of the black athletes finding reverence in each other and strength together.”

Edwards said movements wane after a few years, and that the protests of police brutality by athletes including football player Colin Kaepernick taking a knee during the national anthem will likely fade soon. But he said that protest movements “are in the DNA of American democracy.”

“There are no final victories, but with all of these things we went through, we came out better.”

Earlier Tuesday, Carlos, Hemphill-Strachan and Hoffman spoke to Sun Devil student-athletes as well as students in a class called “Sports in U.S. History,” taught by Victoria Jackson, a sports historian and lecturer in the School of Historical, Philosophical and Religious Studies.

“Sports is so rich. The systems of power and the ideas that play out in society are kind of hard to put your finger on, but we see them play out in sports,” Jackson said.

Hemphill-Strachan told the class that everywhere she goes, she hears stories about her grandfather and that influenced her career.

“My vision as a TV producer is that I’m a storyteller. I look to have stories be told that are transformative — stories that don’t just transform people, but change lives, change laws and change people's ways of thinking,” she said.

Carlos told the young people that these days, he declines to pose for photographs with his fist raised, as in the famous image of him on the podium in Mexico City.

Top photo: John Carlos speaks on a panel about raising his fist for the rights for his son and future generations before a group of students and athletes on Tuesday at the Carson Student Athletic Center in Tempe. Joining him (from left) are Paul Hoffman, 1968 Olympic rower and outspoken ally to black athletes; Gina Hemphill-Strachan, Jesse Owens’ granddaughter and ASU alumna; and moderator and sports historian Victoria Jackson (out of frame). Photo by Charlie Leight/ASU Now