How do you get 1,500 school supplies from Arizona to an island nearly 3,000 miles away?

As faculty, staff and students at Arizona State University discovered, the answer is: “with a great deal of effort and support.”

In the end, 12 large boxes, some weighing as much as 94 pounds, packed with books, backpacks, pencils and other essentials arrived at four elementary schools in Puerto Rico that had been in woeful need of supplies since Hurricane Maria’s plundering of the island in September.

The feat was the result of an impassioned collective effort among several units across the university, including the School of Transborder Studies, Mary Lou Fulton Teachers College and College of Integrative Sciences and Arts.

As news of the state of affairs in Puerto Rico became increasingly tragic in the months following the hurricane, many at ASU felt helpless to do anything about it. For those with personal connections there, the feeling was even more distressing.

“We had all this frustration,” said School of Transborder Studies Associate Professor Maria Cruz-Torres. She and Irma Arboleda, the school’s assistant director, were both born and raised in Puerto Rico and still have friends and family there. They witnessed the devastation firsthand during separate trips to the island: everywhere trees felled, giant electrical transformers tumbled to a stop in empty parking lots, letters spelling the name of an elementary school literally blown off the building.

“We had to do something,” Arboleda said. 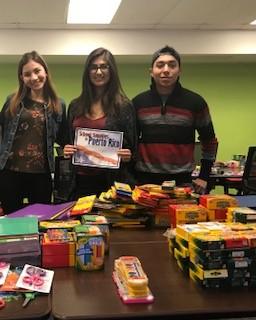 In November, the School of Transborder Studies hosted a symposium at ASU, “De Tripas Corazones: Puerto Rico's Resilience, Creativity and Solidarity After Hurricane Maria.” At the symposium, attendees got to talking and realized several of them had connections with schools in Puerto Rico.

Cruz-Torres’ sister works at a school there, and Assistant Professor of communication and culture Manuel Aviles-Santiago was in touch with the principal of a school who had reached out to him after reading an article he wrote for a Puerto Rican newspaper about a learning activity he experimented with at ASU in which he taught his classes without lights or technology, to simulate the conditions of schools on the island.

From there, they hatched the idea of a school-supply donation drive. Flyers and donation boxes were placed all over campus. Teachers College Assistant Professor Melanie Bertrand noticed one of the flyers and offered to help out by expanding the donation collection to ASU’s West campus, with help from colleague Mildred Boveda, assistant professor of special education and cultural and linguistic diversity.

Word spread, and the number of donations and volunteers rose, with everyone uniting to turn shared feelings of helplessness into constructive action.

“It was a really incredible effort and a great opportunity, and I’m just privileged to be a part of it and to know some amazing people now,” Bertrand said.

But the story doesn’t end there. With all the items collected, they then had to be inventoried, sorted according to which schools needed what, and finally packed. Boxes were donated by UPS, and several School of Transborder Studies students helped with the sorting and packing of the items.

Once the boxes were packed, the question became how to transport the items. First to the airport, then to Puerto Rico.

“It was quite an experience,” Arboleda said.

Thanks to School of Transborder Studies Interim Director Lisa Magana’s truck and the help of ASU Moving and Event Services, the boxes made it to Phoenix Sky Harbor International Airport without incident.

However, when UPS gave Arboleda the boxes, they’d estimated it’d be roughly $500 to ship each one, for a total of $6,000. Luckily, Cruz-Torres knew some people at the Puerto Rican Center of Arizona who knew some people at American Airlines who were allowed a certain number of low-cost shipments per year. A couple of them graciously offered to ship the boxes under their name.

There were some serendipitous moments along the way: One of the contacts given to Cruz-Torres by the Puerto Rican Center of Arizona turned out to be the daughter of an elementary school teacher of hers. And there were some hiccups: Some of the boxes had to be cut open at the last minute in the cargo area of Sky Harbor Airport to remove items like hand sanitizer, which doesn’t fly well.

But, Arboleda said, “it all came together in the spirit of community and service.”

Since receiving the donations, the schools have replied with messages of deep gratitude.

“They’re really appreciative,” Cruz-Torres said. “One of the schools said they can use everything [we sent].”

And though the road to recovery for Puerto Rico may be a long one, she and Arboleda have faith that when communities unite in ways like this, it can be truly empowering.